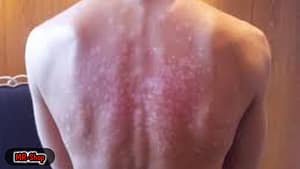 Panu in the medical world is called tinea versicolor or pityriasis versicolor. This skin disease can cause patches on the skin. These patches can make some skin color lighter or darker accompanied by itching.
Panu is caused by Malassezia, a type of fungus that is commonly found on the skin. However, the fungus can grow excessively so that tinea versicolor is formed. Several factors that can trigger the development of this fungus are oily skin, hot and humid weather, excessive sweating, hormonal changes and a weakened immune system. Every human being has Malassezia fungus on his body, and we can be sure that tinea versicolor is not a contagious skin disease. So don’t blame others when you have tinea versicolor.
How to Overcome Panu at Home
If you have tinea versicolor that is not so severe, you can try using creams, ointments, or soaps or shampoos that contain clotrimazole, selenium sulfide (1 percent level), miconazole, terbinafine and zinc pyrithione. This phlegm drug is sold over the counter in drugstores or supermarkets.
Before using tinea versicolor in the form of cream or ointment, it is advisable to:
How to Overcome Panu Medically
After undergoing treatment at home but the tinea versicolor has not improved or has even spread, you should see a dermatologist so that the doctor can confirm through an examination, whether the complaint is really tinea versicolor. From the results of the examination, the doctor can determine the most appropriate treatment.
During the exam, your doctor may scrape a small piece of your skin and examine it under a microscope, or examine your skin using ultraviolet light. If it turns out to be tinea versicolor, the doctor will prescribe tinea versicolor medication with stronger active substances, such as:
After the skin has healed from the fungal infection, you may still see patches of tinea versicolor on the skin. But don’t worry, because the skin color will return to its original color after some time.
How to prevent tinea versicolor from reappearing
The use of phlegm drugs is indeed able to eliminate tinea versicolor, but it is not uncommon for tinea versicolor that has healed to reappear. That’s normal because the fungus is indeed on your skin. This can be prevented by taking tinea versicolor 1-2 times a month, especially if you live in an area with hot and humid weather.
In addition, prevent this skin disease by wearing clothes with natural fibrous materials (such as cotton), avoiding clothes that are too tight, avoiding products that can make the skin oily, reducing exposure to sunlight, and don’t forget to use sunscreen with an SPF level of at least 30. before leaving the room.

5 Causes and Ways to Overcome Shortness of Breath While Sleeping

Here’s How to Overcome Tantrums in Children