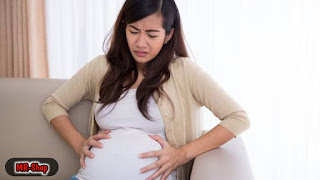 Flatulence is a condition when the stomach feels tight and full. Your stomach will also feel bigger than usual when you experience bloating. This of course can cause discomfort for anyone, especially for pregnant women. Complaints of flatulence can be felt at any time during pregnancy. However, some pregnant women may feel bloated more often from the 29th week of pregnancy.
Causes of Bloated Stomach During Pregnancy
The average person will probably pass gas or fart as much as 14-40 times a day. However, the amount of gas in pregnant women can make pregnant women pass gas more often as well as stomach cramps.
Bloating during pregnancy is caused by the baby in your belly growing and pressing on your belly. It can also slow down digestion.
Bloating can also be caused by the increase in the hormone during pregnancy, namely progesterone. This hormone has a relaxing effect on the muscles, including the muscles of the digestive tract, so they work more slowly.
In addition, the presence of excess gas that enters your digestive tract can cause flatulence. The gas appears in our bodies when bacteria in the large intestine process food waste that has not been digested by the digestive system.
How to Overcome a Bloated Stomach During Pregnancy
To deal with flatulence, the first thing you do is avoid foods and drinks that can trigger gas. For example, broccoli, cauliflower, cabbage, beans, foods that contain lots of fat, fried foods, onions, and soft drinks.
In addition, there are other ways to deal with flatulence during pregnancy, including the following:
Foods high in fructose sugar, such as leeks, whole grains, apples, pears, and processed foods, can also cause bloating in some people.
You need to avoid fatty foods because they can slow down your digestion process, causing flatulence.
Try to eat little by little. Eating too much or eating a lot right away after your stomach is empty, has the potential to exacerbate bloating during pregnancy because it takes a long time to digest.
Carbonated drinks and artificial sweeteners are not allowed for pregnant women. Pregnant women are advised to consume more calcium by consuming lactose-free milk or soy milk fortified with calcium.
Exercise during pregnancy is good for the health of the mother and baby in the womb. Light exercise, such as walking leisurely, can improve digestion so that flatulence can be overcome. You can also try taking yoga classes for pregnant women to feel more relaxed and comfortable during pregnancy.
Smoking during pregnancy is not good for the mother and the fetus in the womb, so you should stop smoking immediately. Not only does it contribute to many serious health problems, it turns out that smoking also increases stomach acidity. Likewise with alcoholic beverages that pose a bad risk to the health of the baby in the womb.
Follow the suggestions above to avoid flatulence during pregnancy. If bloating during pregnancy is getting more and more annoying, accompanied by abdominal cramps, severe diarrhea, or constipation, you should immediately consult a doctor.

6 Ways to Overcome Anemia in Children

The Reasons Behind Often Blaming Yourself and How To Overcome It

How to Overcome Swollen Feet During Pregnancy

This is How to Overcome Pubic Pain During Pregnancy

Don’t worry, here’s how to deal with vaginal discharge

Disturbing vaginal discharge and how to deal with it