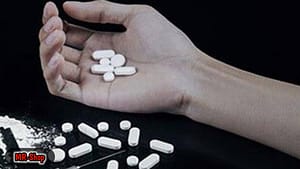 Drug poisoning usually occurs in patients who take more than one type of drug so that they experience the effects of drug interactions or in elderly patients, children, and people who have mental problems. Drug poisoning can also occur if a person takes drugs with drinks or food that can make the drug into toxic compounds, such as alcohol.
In addition, some people may also be more sensitive to certain substances in the drug, so even normal doses can cause poisoning.
Symptoms of Drug Poisoning
Symptoms of drug poisoning can vary, depending on the type and dose of the drug consumed, as well as the person’s health condition when taking the drug. Symptoms of drug poisoning are also often side effects of the drug, but with a higher severity.
Some of the common symptoms that can appear in someone who has drug poisoning are as follows:
As said earlier, the symptoms of drug poisoning can be different, according to the type of drug that causes poisoning. For example, someone who is poisoned by opioid drugs will experience clinical symptoms and signs such as narrowed pupils, slowed breathing, weakness, nausea, vomiting, changes in heart rate, and being less alert.
Meanwhile, paracetamol poisoning can cause symptoms of drowsiness, seizures, stomach pain, nausea, vomiting, liver damage, and even coma. Overdosage of paracetamol is very dangerous and usually appears only three days after the drug is taken.
First Aid for Drug Poisoning
If someone experiences drug poisoning, immediately call an ambulance or take him to the nearest hospital so that he can be treated as soon as possible. While waiting for medical help to arrive, things you can do are:
It is important for you to pay attention to how to deal with drug poisoning and avoid some of the things that are prohibited above so as not to worsen the condition of people with drug poisoning.
After medical help arrives, explain to the doctor or medical officer about the drugs taken and the symptoms that arise after the patient has been poisoned.
Handling of drug poisoning needs to be done by a doctor at the hospital. Patients with drug poisoning often require hospitalization so that their condition can continue to be monitored.
If you accidentally take the wrong one or take too much of your medicine, and are worried about getting poisoned, don’t wait for symptoms to appear. Immediately go to the emergency department at the nearest hospital for help.

Mother, here’s how to deal with prickly heat in babies