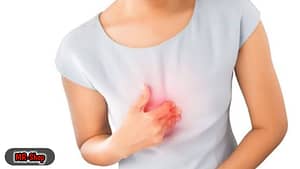 Heartburn, also known as heartburn, usually occurs in the center of the chest or just above the stomach. This discomfort is often accompanied by a bitter and sour taste in the mouth. Symptoms of heartburn may become worse immediately after a large meal or while lying down.
Causes of Heartburn
Heartburn occurs when the ring-shaped muscle (the sphincter) that is the valve between the esophagus and stomach cannot tighten or close normally. Supposedly, this muscle ring can contract after food from the esophagus into the stomach.
If the sphincter muscles are weak, food that has been mixed with stomach acid can back up into the esophagus. This rising stomach acid can irritate the lining of the esophagus and cause a burning pain in the chest.
Heartburn can be triggered by several things, including:
Not only that, heartburn can also be the result of a hiatal hernia, which is a condition when the upper part of the stomach enters the chest cavity.
How to Prevent and Overcome Heartburn
If heartburn occurs only occasionally, there are some easy ways you can do to prevent or relieve the symptoms, namely:
If heartburn often appears to interfere with activities and rest, this condition is considered a sign of acid reflux disease or gastroesophageal reflux disease (GERD).
GERD is a condition that needs to be treated with medication from a doctor, even with surgery if it is severe. If not treated properly, GERD can cause inflammation, sores, and bleeding in the esophagus, and can even increase the risk of developing esophageal cancer.
Heartburn is a fairly common complaint and not necessarily dangerous. However, if these symptoms occur more than 2 times a week, do not improve with over-the-counter medications, or cause difficulty swallowing, nausea, and vomiting, consult a doctor immediately for treatment.

Feeling Tired of Relationships? Here’s How To Overcome It

How to get rid of a stuffy nose at home